Some History and Bishops 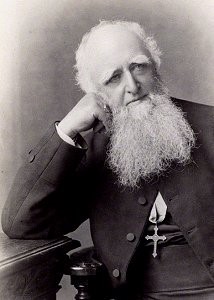 The very early days of the Diocese of Dunedin got off to a rocky start with the first Bishop appointed not able to take his seat. The controversy of what happened to Henry Jenner has echoed down through the years. In August 2018 Dr Tony Fitchett gave a talk about Jenner at the Anglo Catholic Hui held in All Saints Church, Dunedin. Click onto the More Information button to read this. 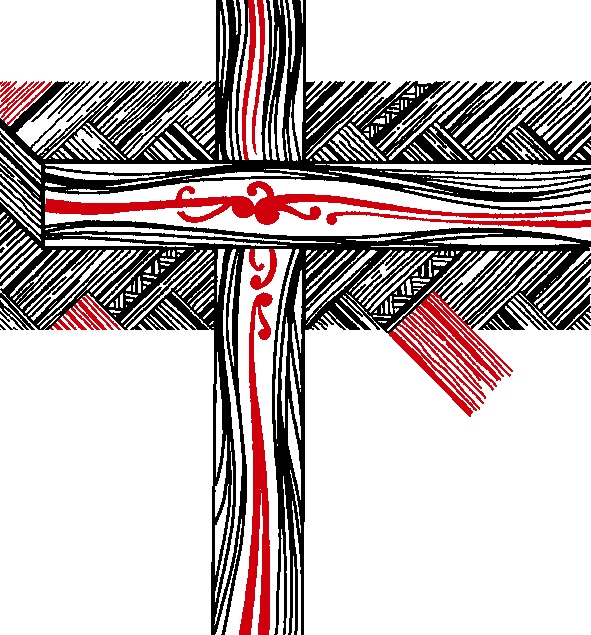 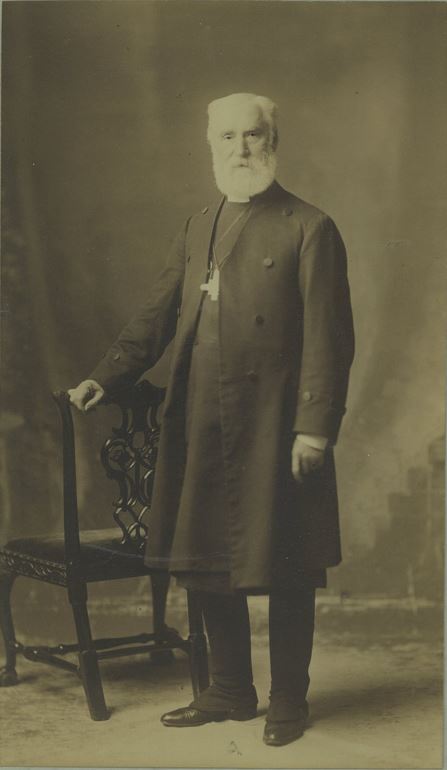 Samuel Nevill was born on 13 May 1837 in Nottingham, England, one of six children of Mary Berrey and Jonathan Nevill. He was ordained deacon in 1860 and appointed curate of Scarisbrick in the parish of Ormskirk, Lancashire. While there he met Mary Susannah Cook Penny of Heavitree, Devonshire, and married her on 3 July 1862 at Heavitree. Samuel was ordained priest in 1861. Samuel, when approached, indicated that if Dunedin were to nominate him as its first bishop he would accept. He was duly nominated and accepted, and was consecrated on 4 June 1871. 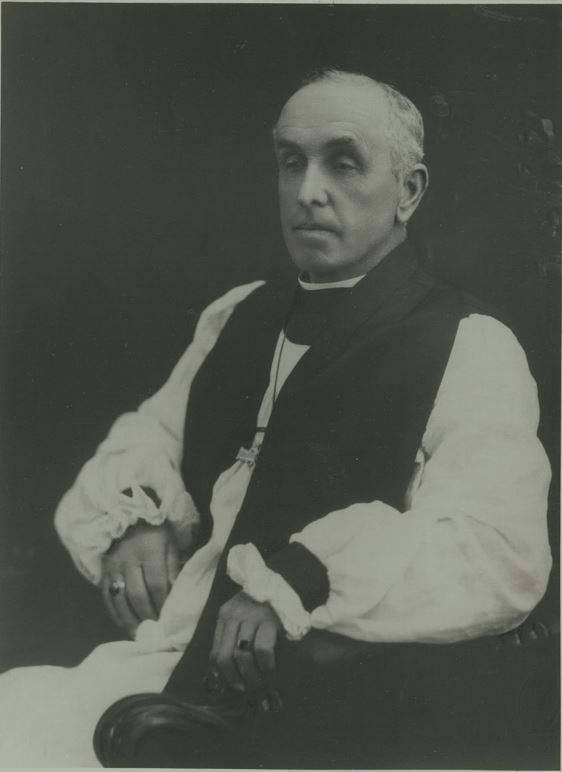 According to Wikipedia, Isaac Richards was educated at Exeter College, Oxford and ordained in 1882. He was curate of St Paul’s Truro then vicar of St Mark’s Remuera. In 1895 he became Warden of Selwyn College, Otago. Later he was Archdeacon of Invercargill, a post he held for 11 years before being appointed Bishop of Dunedin from 1920 to 1934.  Isaac was also the Chaplain at St Hilda’s for 38 years.  Sadly, he had two sons  were killed at Gallipoli, one  on April 25th, with the other dying of his wounds a week later, One of the stained glass windows in St Hilda’s Chapel is in memory of them.

Isaac was also a cricketer, playing first class matches for Auckland in the 1890s. He died in 1936 in his 78th year. 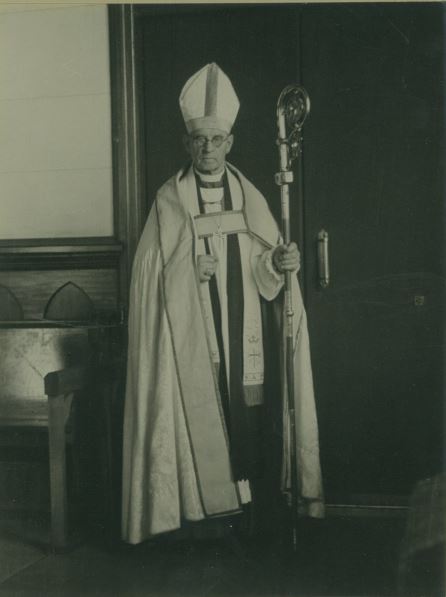 Fitchett was born in Christchurch and his father was the Very Reverend Alfred Robertson Fitchett CMG of Dunedin. He was educated at Otago Boys’ High School and Selwyn College, Cambridge.Ordained in 1901, he was curate then priest in charge of St Thomas’ Wellington before being vicar of Dunstan and Roslyn. In 1915 he became the Archdeacon of Dunedin, a post he held for 19 years before being appointed its Bishop. 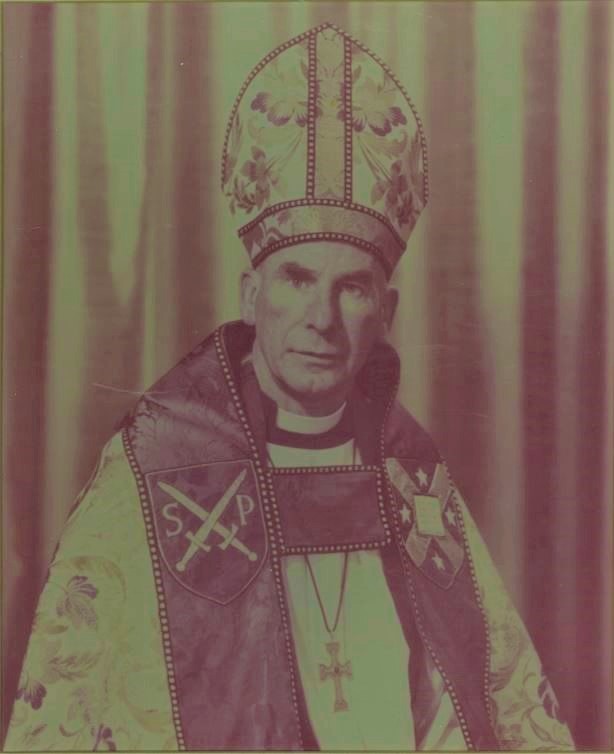 Johnston was born in Auckland, New Zealand. He was educated at Seddon Memorial Technical College and St John’s College, Auckland before beginning his ordained ministry with a curacy at St Mark’s Remuera. He then had incumbencies at Dargaville, Northern Wairoa and Otahuhu. In 1949 he became Archdeacon of Waimate, a position he held for four years before being appointed the Bishop of Dunedin. He was translated to be Bishop of Waikato in 1969 for 11 years and was additionally elected Archbishop of New Zealand in 1972.

Walter Wade Robinson (10 December 1919 – 6 October 1975) was an Anglican priest in the second half of the 20th century. Robinson was educated at the Cathedral Grammar School, Christchurch and Canterbury University before his ordination in 1943. He was curate of St Mary’s Timaru and then of St Gabriels, Cricklewood. He then had incumbencies at Linwood and Viti Levu West. Later he was superintendent of the Indian Mission in Labasa and general secretary of the New Zealand Anglican Board of Missions. In 1969 he was appointed Bishop of Dunedin. Walter was also an accomplished singer (soloist). He died in office in 1975 in his 57th year. 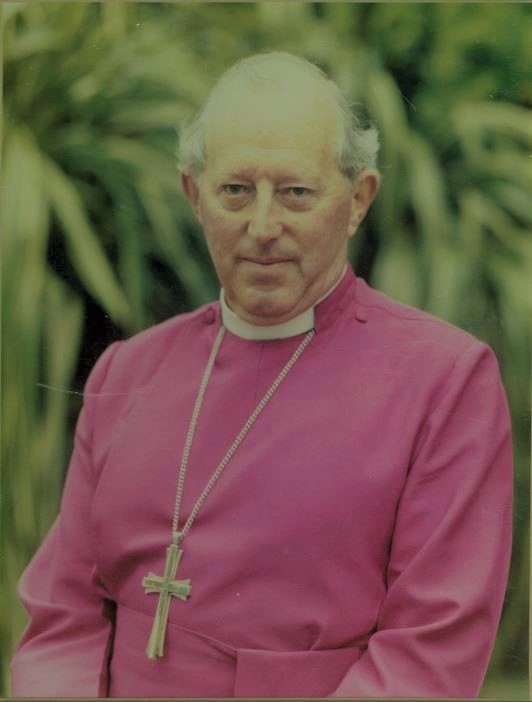 Peter Woodley Mann (25 July 1924 in Perth, Western Australia – 24 August 1999 in Dunedin) was the sixth Anglican Bishop of the Diocese of Dunedin in Dunedin, New Zealand.

Mann was educated at Prince Alfred College, Adelaide and St John’s College, Auckland before being ordained in 1954. He held curacies at Waiapu and Rotorua before holding incumbencies at Porangahau and Dannevirke. Later he was Archdeacon of Blenheim, Marlborough and Timaru before his ordination to the episcopate) 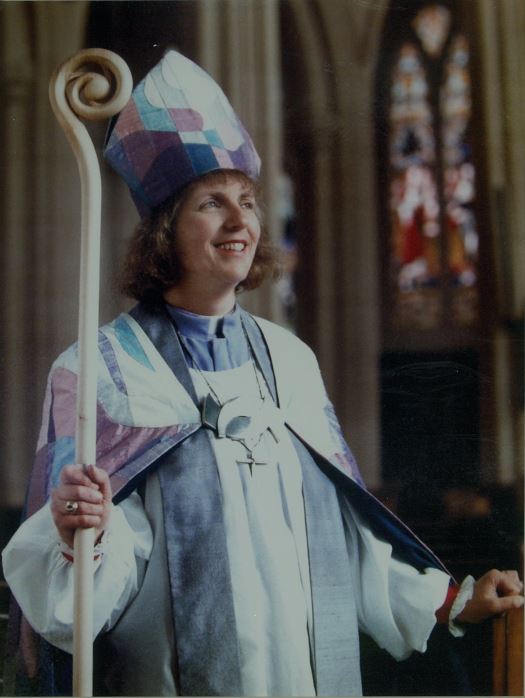 English-born New Zealander Penny Jamieson was the first woman in the world to be ordained a Diocesan Bishop of the Anglican Church.

While Vicar of St Philip’s in Karori, Penny was nominated by a group of women for the position of Bishop of the Anglican Diocese of Dunedin. She was consecrated in 1990, and some criticised the sudden promotion, foreshadowing opposition from the church’s conservative element that would cloud her 14 years in the role. Penny Jamieson retired in June 2004, and was made a distinguished companion of the New Zealand Order of Merit soon after 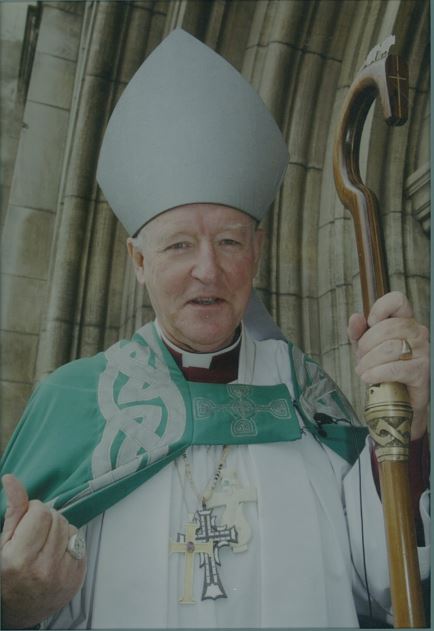 George was educated at St John’s College, Auckland and ordained in 1966. He was a Theological Tutor for the Church of Melanesia and then a Maori Mission priest for the Diocese of Waiapu. He was Archdeacon of Waiapu and then Regional Bishop in the Bay of Plenty until 2005 when he was translated to Dunedin. He resigned his episcopal see on 30 November 2009. He is married to Nonie Connor. 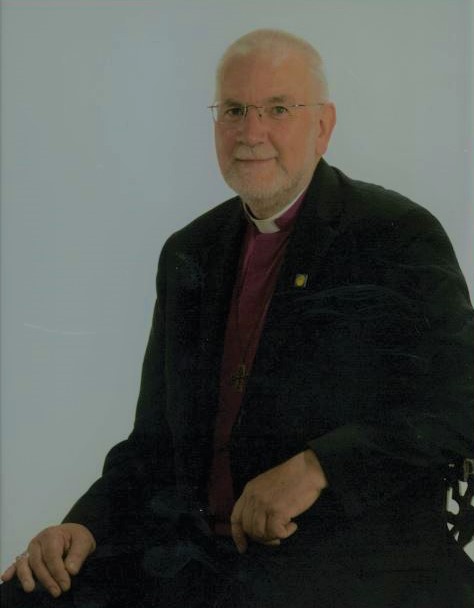 Kelvin  was the ninth Anglican bishop of the Diocese of Dunedin in Dunedin, New Zealand. Bishop Kelvin retired on Easter Monday 2017.

He was educated at St John’s College, Auckland, the University of Canterbury, the University of Otago and the San Francisco Theological Seminary. Kelvin was ordained Deacon in 1979, Priest in 1980 and Bishop in 2010. He served as Curate at Merivale and as Vicar of Waihao Downs, Hillcrest, Sumner Redcliffs and St John’s Roslyn.

Kelvin is currently engaged in a very “active retirement”, serving as a Regional Facilitator for Anglican Schools of Aotearoa New Zealand and Polynesia, as well as continuing to lead worship and act as a spiritual director. He lives in Dunedin and is married to Clemency. 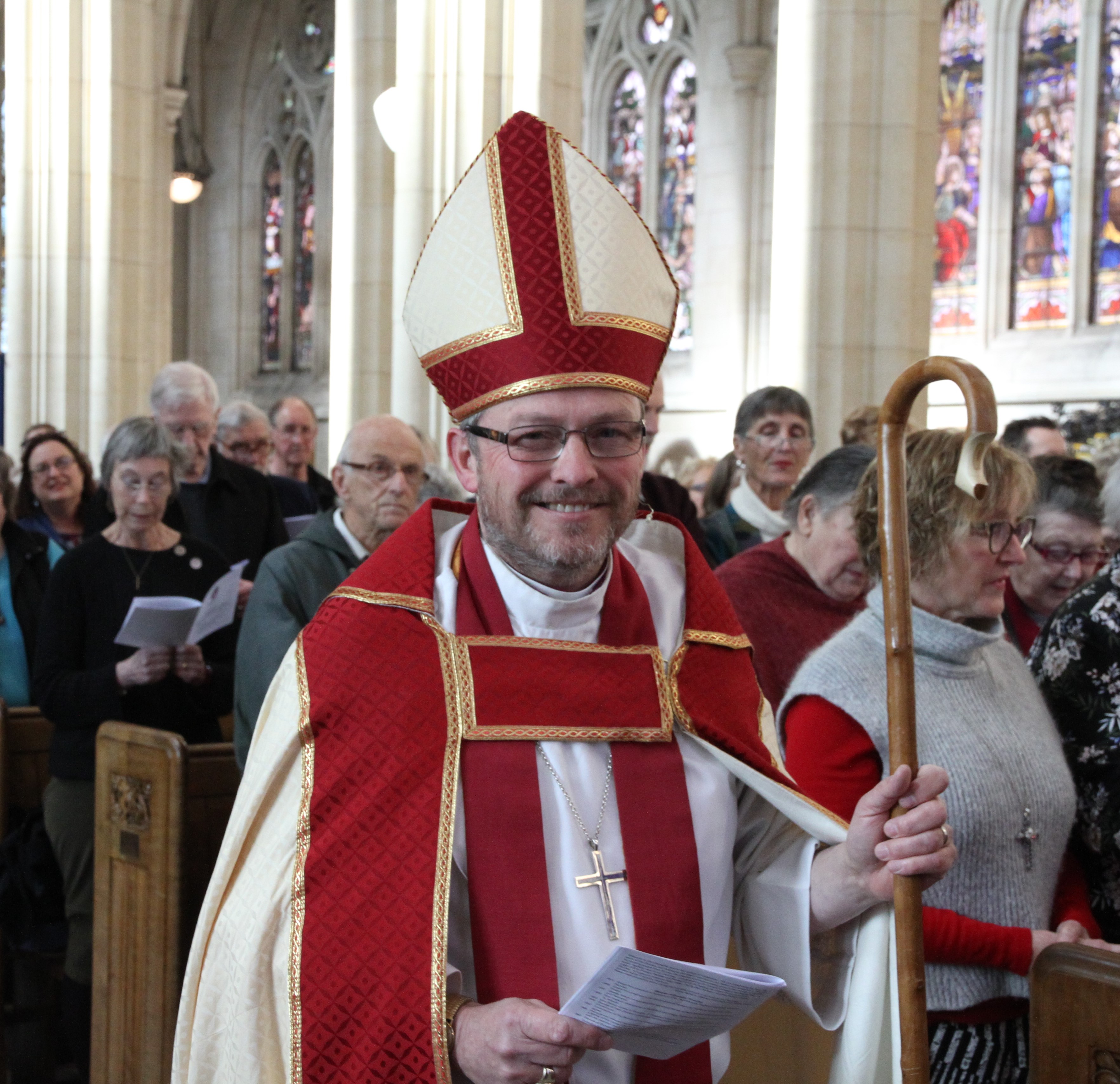 Steven (Steve) Benford, (born 14 August 1961) is the tenth Bishop of Dunedin, New Zealand, ordained and installed on 22 September 2017. Since October 2014, he had been the Vicar of The Church of St. Joseph the Worker, Northoltin West London. In the Diocese of London, he was also a bishop’s adviser for ministry, a new incumbent’s ministry mentor and spiritual director.

Steve has pursued a double career, for many years having worked as a doctor, having specialised as an anaesthetist working in the north of England, then in New Zealand, and then back in the North of England.

Most of historical information is kept in our various archives, but we have some items of interest in the Diocesan Office 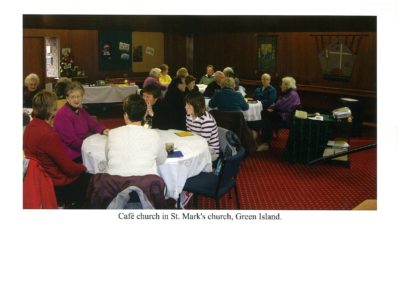 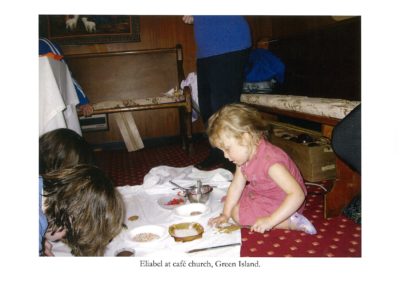 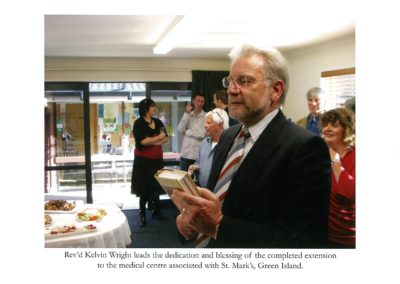 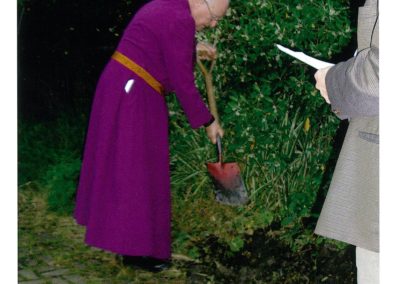